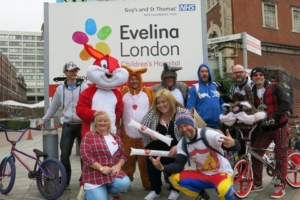 Dad Stephane Wright and his friends at BMX Life have raised over £50,000 for ECHO over the last three years – an absolutely phenomenal amount of money!

Stephane’s son Tommy was only 6 months old when he suffered a heart attack and nearly died. He was admitted to Evelina London Children’s Hospital in October 2014. Tommy spent four weeks in Paediatric Intensive Care and the High Dependency Unit. Fortunately Tommy recovered well and was able to return home to his parents, Stephane and Karen, and sister’s Caitlin and April. However, Tommy will require further operations as he grows up, so will be returning to the Evelina London in time.

The experience was life changing for his parents, Stephane and Karen, who were so grateful to the hospital for saving their son’s life they wanted to give something back. Whilst the Wright’s had a supportive network behind them they wanted to be there for families who struggle when going though similar experiences, which is one of the reasons they chose to support ECHO.

Stephane and his friends formed ‘BMXLife’ – a group which sees enthusiasts from all walks of life, joining together with a shared interest in 1980’s BMX bikes; sourcing, building and of course, riding. Through BMXLife Stephane has organised various fundraising events – but the biggest have been his BMX Cruises through central London at Christmas and Easter. Last December over 300 BMXers dressed as Santa Claus rode through London’s streets dropping Christmas presents for children staying at the Evelina London Children’s Hospital and raising thousands of pounds in one day.

Stephane has been interviewed on London’s ITV Evening News, BBC Radio, and the Metro newspaper about his decision to fundraise for ECHO – listen to and read Stephane’s interviews here.

The whole experience has been life changing but ultimately the Evelina saved Tommy’s life - we decided we wanted to create something special that would raise awareness for the hospital and money for an important charity ECHO, as well as being fun for us old schoolers!

The amount of money that Stephane and the BMXLife crew have raised for ECHO is quite simply amazing – it has made a real difference to the ECHO Community.

We would also like to thank Dan Cash, a member of the BMXLife team and an enthusiastic supporter of its fundraising efforts for ECHO. Dan was sadly killed in 2016, whilst cycling in central London.

To celebrate Dan’s memory and to demonstrate the gratitude the ECHO team feels towards BMXLife we have recently incorporated ‘BMX’ within the design of the new parent’s resource room at the ECHO office. The aim of this room is to provide parents staying at Evelina London with a space near the hospital if they need it. The room is designed with soft furnishings and is a place for parents to seek solace and relax, there is also a computer available (not currently easy to access in the hospital) as well as free tea/coffee. For parents, some of whom spend weeks if not months at the hospital, this type of space is much needed.

This room will be available for families for many years to come, and it is only through the support of people like Stephane and BMXLife that things like this are made possible.