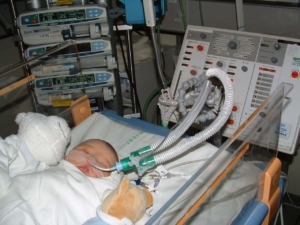 Alfie was born May 17th 2004. We knew beforehand that Alfie was going to be a cardiac Baby when we had the 20 week scan and it was picked up that our child had a serious and rare heart condition; the diagnosis was Pulmonary Atresia with intact ventricular septum. We were made an appointment with a specialist fetal cardiology team at St Thomas Hospital London we were immediately taken care of with a plan drawn out for Alfie’s Birth and given all the information – it was a big shock!

We had further meetings and were told Alfie was going to have a three stage Fontan procedure which would mean it was likely he would need a transplant by the time he was teenager.  So the day came we packed our bags and off we went to ST Thomas hospital so Beccy could be induced into labour.

We won’t ever forget the view we had from our room of Big Ben across the river and the London Eye going around and around it was a long long night! We had an amazing midwife who kept a close eye on Beccy and especially Alfie’s heart rate; it was touch and go whether a cesarean was needed thankfully it wasn’t and in the morning at around 10.30 Alfie was born. As soon as he was born the PICU team who were waiting outside came in and after a quick cuddle he was taken away and rushed to Guys’ Hospital where he was looked after by the PICU team. 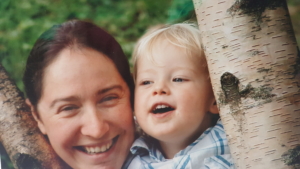 When we arrived Alfie’s oxygen levels were around 50%, he was very blue and hooked up to wires and tubes and the bleeping noises from the monitors kept us on edge, every time you hear an alarm or bleep you worry but it’s all normal and the nurses put us at ease. The day before Alfie’s procedure we were told there was a surgeon flying in especially to talk to us about a procedure that could give Alfie a better outcome in the future but was going to be more risky.

We were very worried because we had built in our minds a picture of what was going to happen at 3 different stages and all of a sudden there was a choice – so we thought do we selfishly stay with the original plan with less risk and more time with our baby, or take a higher risk and maybe have a short time with our baby if things went wrong – we were a mess!

So the next day we met this Surgeon his name was Dr Qureshi and when he came in the room there was a sense of calm and when he spoke to us so reassuringly it was like we knew instantly that we were going to take the risk and give Alfie the best chance possible. He was an expert in catheterisation in babies and was planning on making a small hole in the blocked valve in Alfie’s heart to allow the blood to enter the chamber, and hopefully have 4 usable chambers.

The next day Alfie went down for his procedure it seemed like the longest day ever. Time almost stands still.

When he came back he was on a ventilator he looked so helpless, the nurses and doctors were amazing explaining what everything was for and what the bleeping noises were, his oxygen levels were now around 70%.

We spoke to Dr Qureshi and he said everything went well and we would be transferred onto a ward as soon as Alfie was ready. 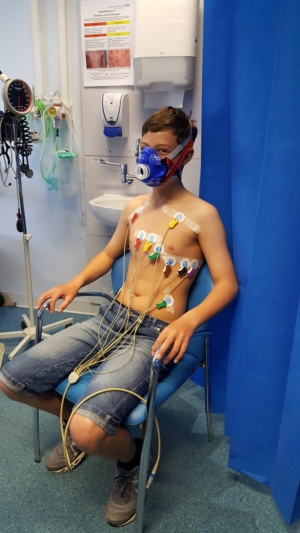 We were also given a room at the Ronald McDonald house, this is where parents can stay at no cost and be close to the hospital and not have the worry of long travel in and out of London every day, this house was amazing it had a kitchen we could cook in nice comfy beds a phone line direct to the hospital so we could annoy the doctors and nurses by ringing every 5 mins checking on our Boy! But one of the best things was we could meet and talk to parents who were going through the same things as you were this was so important and so helpful these Ronald McDonald houses are just so so important to parents and we are so grateful we had the opportunity to be given a room to stay in.

Back on the ward things went well, Alfie made a steady recovery and had lots of scans (I mean lots!) the team on the cardiac ward are just amazing.

The team go all out for your child they give 200% and are a credit to the NHS. I think we were on the ward for 10 days and when Alfie was allowed home we were so nervous about not having the expert doctors and nurse by our side taking care of him we didn’t quite know what to do!

However we were given an outreach nurse – someone we could call if we were worried about Alfie – her name was Trish she was also amazing and we did call her quite a few times! This was our life line and was so invaluable, we had regular visits to the hospital for scans and checkups and Alfie made steady progress although always looking a bit blue around his lips.

Then in 2007 he needed a balloon pulmonary valvotomy this was going to stretch his valve opening to allow more blood flow to increase his oxygen levels, so back we were for another operation and again we were so well looked after by the fantastic doctors and nurses and of course Dr Qureshi – although you know your child is in the best possible hands it still so hard when you have to hand them over and again time stands stil. Back on the ward Alfie recovered quickly his oxygen levels now around 75 to 80% and a shorter stay this time, children seem to recover so quickly it amazed us seeing different children having major open heart surgery then a few days later they’re up and about!

At home again Alfie was always active although restricted and tired easily and colds seemed to hit him hard! We got on with busy life now Alfie had a brother. On his next follow up with Dr Qureshi we were told Alfie was going on a waiting list to have an ASD closure – this was to close a hole in his heart and made quite tricky because he had an irregular shaped septum and there was a risk that the closure device wouldn’t hold and if not he would have a one and a half ventricular repair.

So in April 2008 we were back and yet again the level of care was outstanding and mum was again able to sleep in a bed next to Alfie on the ward – this was so important to us and made the whole stay less stressful. Alfie’s operation was the longest yet and was gone pretty much all day I think around 8 to 10 hours as they had trouble with the closure device but managed to secure it using the biggest device available; we were amazed at the difference after the operation his oxygen levels had risen to 85% and would rise further still in time.

We were on the ward for a short two days amazing considering the length of time he was down and of course helped massively by the care he always received by the doctors and nurses. The next checkup soon came around 6months infact and now his oxygen levels were measuring 94% and looking well pink! The checkup was excellent and given the news that we would be seen in a year instead of 6months was fantastic we knew he was doing well!

The years flew by with Alfie growing up fast, we had the odd concern when he had colds or viruses and a few trips to the local hospital to get checked out but he always bounced back, we eventually went to every 18months for his checkups always seeing Dr Qureshi never once did we come away worried he always has a way of explaining things so well and he’s so calm and gentle.

Now some 15 years on doesn’t time fly and Alfie still needs another operation this time to replace his leaking valve that has been stretched a few times, and this may be done through a catheter. I know I couldn’t believe it either – replacing a valve through a catheter its astonishing what the future is bringing and shows how important fundraising is to allow for these advances in skills and technology! 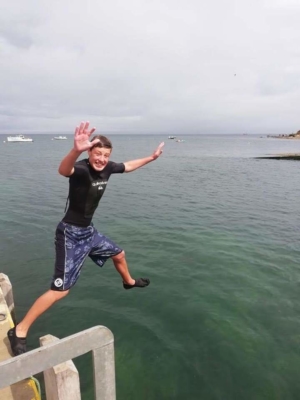 Alfie is doing so well – he is a model student at school always smiling, helpful, energetic, someone to look up to.

He has a passion for engineering, has an amazing group of friends and never lets obstacles get in his way in fact this weekend as I write this story he has just completed his Duke Of Edinburgh Award doing two days of hiking many miles over 40,000 steps and steep ones too! So he is proof that anything can be achieved and having a heart condition does not stop you achieving your goals you just have to know your limits and work with that! We are so so proud of him and what he has achieved I must mention that Alfie has a cuddly toy he calls bear now he has been with Alfie every step of the way been in every operation and every visit too!

So I’m thinking it’s about time I gave something back, I could never give enough for what Alfie has received and we are so gratefully of the care Alfie has received right from the 20week scan through to the present day and future and I must mention again the main man Dr Qureshi without him flying in on that very day things could of turned out differently, but they didn’t and we owe him and his team and all the doctors and nurses a massive thankyou you are our heroes!

So back to giving something back I thought I’d like to raise some money by jumping out of a plane – I’m not keen on heights but I work with a nice chap who is a tandem skydiving instructor at weekends and he is going to take me up!

You can donate to Mark’s fundraiser for ECHO ahead of his skydive challenge in September 2019 at https://uk.virginmoneygiving.com/MarkTurner73