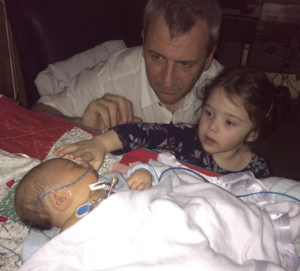 Our son, Joshua, was flagged up with a heart anomaly at his 20-week scan. After we were transferred to St. Thomas’ in London, it was confirmed that he had a condition called Transposition of the Great Arteries (TGA).

After knowing this fact, we attended one of the ECHO antenatal classes. It was great! We got to see the PICU and NICU wards, which can be overwhelming the first time, and we were also told about Ronald McDonald house, which made staying close by so much easier. Knowing that you are not the first person to go through all of this experience did help.

We attended one of the ECHO antenatal classes, and it was great! … Knowing that you are not the first person to go through all of this experience did help. 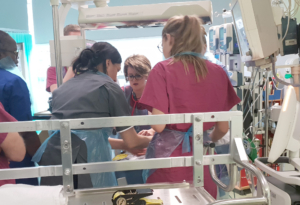 On the day he was born I thought it was like any other planned C section with the exception of a few more neonatal doctors waiting for the arrival. What I didn’t see was loads of stuff that went on in the background that they don’t need to tell you about like prepping the ICU bay, special cots and all that stuff.

As he was born I still got to cut the cord and mum did get to see him for a few seconds as he was whisked away to NICU (neonatal intensive care) to be stabilised.

I counted 10-12 people were working on him. It was strange, but I didn’t feel scared—the calmness of the staff was infectious.

I went with him, and I counted 10-12 people were working on him. It was strange, but I didn’t feel scared—the calmness of the staff was infectious. At that point, it was decided that his oxygen levels were deficient; therefore, a procedure called ‘balloon septostomy’ was required when he was just 6 hours old.

Seeing him on a ventilator for the first time was not a nice experience. The ventilator was removed after about 36 hours, when his oxygen levels went up from 65 to 85 percent. This was when we were told that his main surgery will be done when he is six days old. 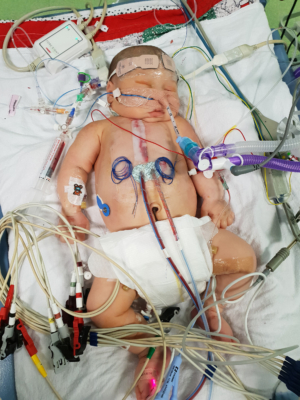 So… the big day eventually arrived. You walk down with the cot to the theatre where they ask you to hand over your baby. We knew that without this operation, we would lose him within a month. As hard as it is, you find the strength to give him a kiss, whisper something in his ear, and then walk out.

The operation itself took about 2 hours, but taking into account the pre and post-operation, and some minor complications, we had Joshua away for 6 hours. During this time, try to do anything you can to take your mind off of the incredibly brave thing you are doing: go get food, stay in the restaurant for at least a couple of hours, and change the rooms you sit in.

When Joshua came back from the theatre, he was ventilated and drugged with more tubes and wires than any person should ever have, let alone a tiny baby. There will probably be a huge amount of swelling; this is water being pushed out of the body and is treated with diuretics. We had a nurse assigned at the start of each shift whose sole job was to look after our son. We met some incredibly professional and dedicated nurses during our stay.

We will be eternally grateful to every single person who was part of his care—they are amazing people who had saved our son’s life. 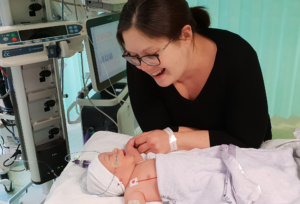 The recovery stage was incredible as you can see the improvement each day. Although there were setbacks, 7 days after the operation, we were surprised as the consultant said we might be going home in 2 days. We were not prepared! We soon tried to get the essentials such as a cot, rocker, sterilizer, bottles, etc.

The next day, we were told we could go home that day, 8 days after surgery with our 14 day old baby.

We will be eternally grateful to every single person who was part of his care—they are amazing people who had saved our son’s life.

Some advice I can offer is:

I truly hope it all goes well for you all and hope this story gives you a slightly different dad’s perspective. Good luck!