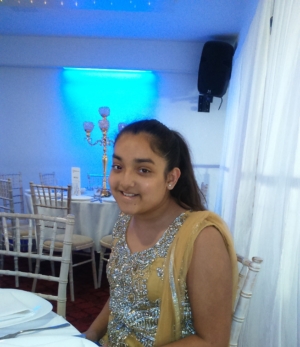 My pregnancy with Chey was really difficult. I couldn’t keep anything down and the hospital kept putting me on a drip, rehydrating me, then sending me home. I must have been scanned 20 times or more, but apart from some worry about the umbilical cord, they said the baby was fine. In the end I was induced and had Chey really quickly, in just over an hour.

From the second I saw her, I knew something was wrong. She had ruby red lips but was very grey looking. Her skin was weird, see through almost. But they didn’t pick anything up at her six weeks check.

She kept getting infections and wasn’t feeding well. She was gaining weight slowly but was still in new born clothes at 6 months, which I knew wasn’t right.

After another infection, we went back to the GP and finally the doctor heard a heart murmur. Chey was seen straight away by a heart specialist at a hospital in London and had a scan which revealed a ridge and a leaky heart valve. He wanted to see her again in six months, but we moved away to a different region and our new doctors couldn’t hear the murmur, so they ignored what I was telling them. One of them even asked me if I knew what Munchausen’s by Proxy Syndrome was, which you can imagine made me really angry and upset.

Four years down the line, Chey was still getting lots of upper respiratory infections and in one year she had 14 lots of antibiotics. I was so frustrated and felt ignored, like I was some kind of

over-protective mother going over the top, but I knew there was a problem.

From this point on, Chey was treated at Evelina London. The doctor did an echocardiogram, which scans the heart, and explained she had a PDA (Patent Ductus Arteriosus) – this meant her blood wasn’t flowing properly between two major arteries connected to the heart, putting strain on the heart and lungs. He also said she had a small leak in her valve. They operated six weeks later and I can’t tell you how hard it was, putting my little girl’s life into someone else’s hands knowing you have no choice, you have to do it. It’s the hardest thing ever.

On the day of the operation, I went down with her for the anaesthetic and this was the worst part, leaving her to go into theatre. And then the waiting, with everyone telling you to get a coffee or go for a walk. It was unbearable. I couldn’t leave. Every time the phone rang and the nurse answered, I wondered if it was Chey. Then the call came and when I saw her on the bed, I just ran to her side. She was fine, just a bit scared and sore.

She’s fourteen now, and we’ve seen a huge difference. She’s still got a small leak and a heart murmur, but her PDA has been sorted and her health’s really improved.

ECHO have been incredible. I’d seen a leaflet about them on one of the hospital wards and I emailed to join up. We’re here to stay, that’s for sure!  The connection Chey has with other heart children is fantastic. It was instant, just like the connection between us parents. It can be hard explaining things to your own family and friends, but the heart community at ECHO just get it. We’re like a big family that are bonded forever.

Lots of parents have suffered loss and we all support each other without judgement. I find such strength being part of ECHO. We all have feelings in common and share information because we all trust each other. ECHO does so many amazing things and all the staff are lovely. We have such a laugh with everyone, which is wonderful when your life’s often so full of worry.

NOTE FROM ECHO: If you have concerns about the issues discussed in this story or would like information on similar topics please contact ECHO.